Founded in 2014, the Atlanta Science Festival (ASF) is an annual two-week celebration of the Atlanta science community consisting of more than 100 events and a grand finale: The Exploration Expo. With experiences such as cooking and eating bugs, discovering the science behind beer brewing, witnessing wildlife through Atlanta’s forests, and stopping a zombie outbreak, it’s no wonder the festival has seen remarkable success in a few short years, drawing more than 41,000 attendees annually. There is something for everyone, and no one walks away from the festival disappointed at its offerings.

ASF approached Lenz to help with three aspects of the festival: growing their digital presence, driving festival attendance, and extending the festival’s brand to solidify its place in Atlanta’s busy schedule of events.

Lenz was up for the challenge, so we began with the digital strategy. ASF already had an avid affinity group since inception, but our challenge was to grow this affinity group and keep them engaged with ASF well beyond the festival weeks in March. Often times, attendees disengage with a brand after an annual event, only to re-engage at the next event. In order to combat this phenomenon, we created dynamic, relevant, and interesting content for the ASF website and social media properties during the festival off-season. This included creating a blog series called The Awesome Science of Everyday Life in which we examined the science behind beer by interviewing Atlanta-based Orpheus Brewing founder Jason Pellett. We also were able to dig into the science behind neon lights with an Atlanta staple, The Neon Company. Through our promotional efforts, these features reached over 18,572 people on Facebook and had over impressions 7,998 on Twitter. Additionally, they drove a combined 879 pageviews on the ASF website. 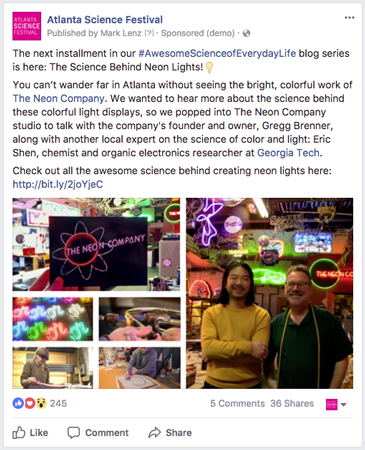 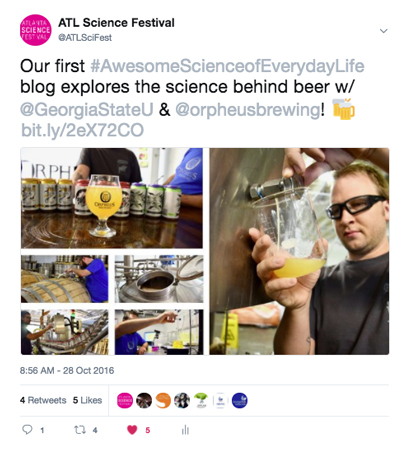 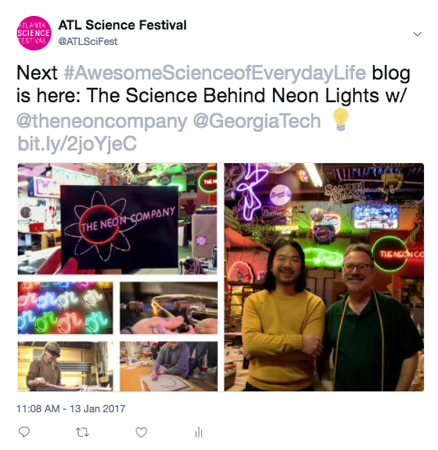 In addition to blog content creation, we also strategically aligned with the CDC’s Flu Division on Twitter for a timely Twitter Chat regarding flu season and vaccines. This chat garnered over 4,800 impressions for the ASF Twitter account in one day. We also recommended engaging in the discussion on climate change, a hot discussion topic during the 2016 election. With this in mind, we called on Dr. Marshall Shepherd, Director of University of Georgia’s Atmospheric Sciences Program and host of the only nationally-televised Sunday Talk Show focused on science, The Weather Channel’s Weather Geeks. In our Twitter Chat with Dr. Marshall, our tweets garnered over 8,800 impressions. In doing so, ASF was able to contribute to the science community conversation well beyond the festival weeks. 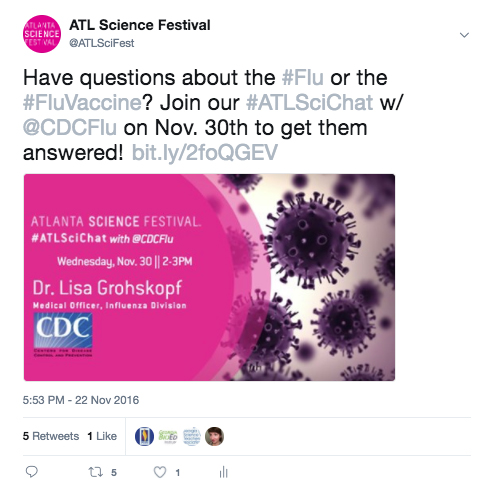 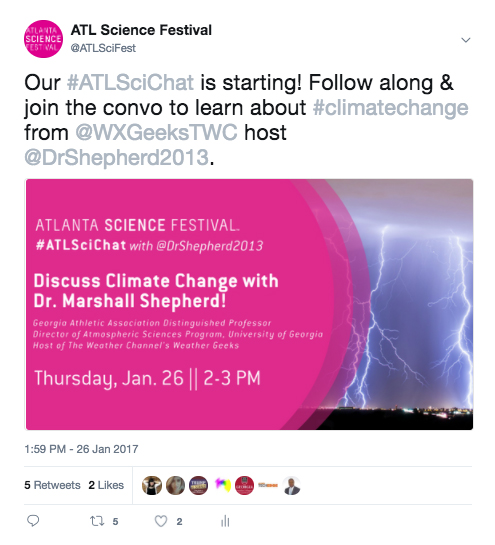 During our onboarding meetings with ASF, the directors shared an interesting insight: there seemed to be a disconnect in festival attendees between the 100 events and 1 big party at the end of the festival, the Exploration Expo. The vision of the festival was to reach as many people in the Atlanta area over a two-week period and have them interact with the festival in many different ways. To reach this goal, we recommended a few programmatic changes to the festival calendar to align the needs of the festival with how Atlanta media would be able to craft a newsworthy story with a strong call to action to attend more than one event during the festival. We recommended to have a “Launch Event” at the beginning of the festival to gain attention and momentum with the public. Upon consultation with Lenz, ASF selected Captain Mark Kelly, a former NASA astronaut, to headline the Launch Event with a dynamic keynote speech.

By placing the Launch event and the Exploration Expo at both ends of the festival calendar, ASF was able to secure attention and engagement with the public with over 41,000 attendees for the 2017 festival. 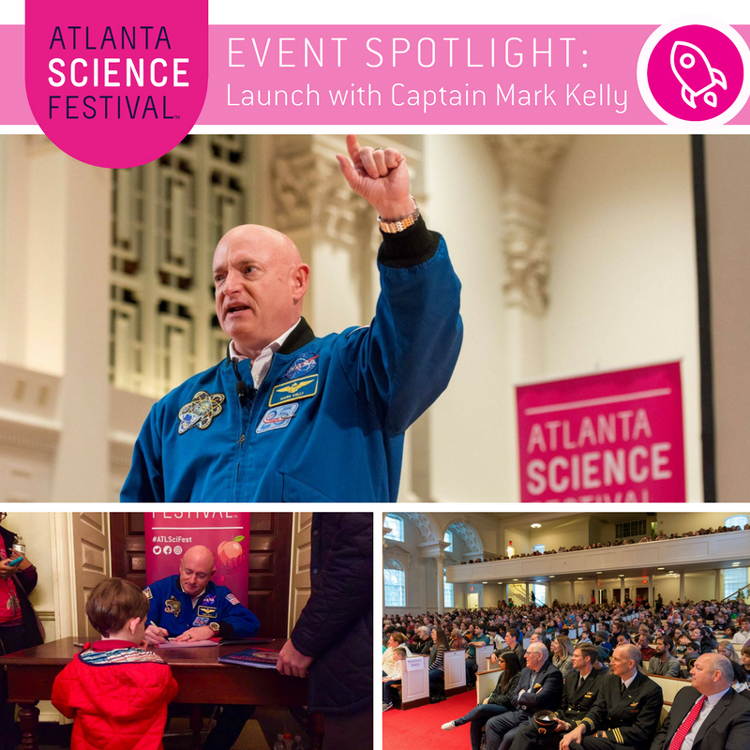 With its  growing popularity, the ASF needed a playful, memorable brand to help solidify its place among Atlanta’s busy calendar of events and reach even more curious people across the region. ASF came to Lenz for help with this task, and thus ALEX was born into the universe.

The 2017 festival was a hit, drawing an attendance of over 41,000. At the Exploration Expo alone, 19,000 people came into contact with ALEX through festival signage, programs, and exhibits at Centennial Olympic Park. With over 100 events, 70 venues, 14,500 followers on social media channels, and 200 million media impressions, it is safe to say that ALEX made a grand debut. 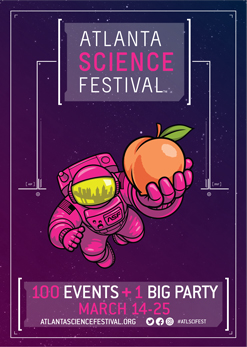 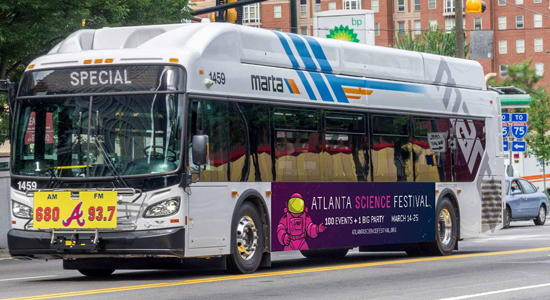 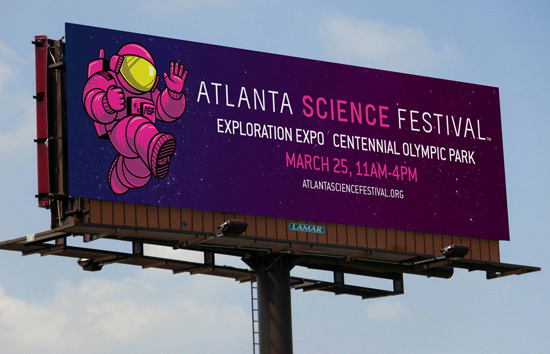