DO MORE by Amplifying Decatur

A personal hero of mine, Jerry McCollum, had a plaque on his desk that no one could miss when you came into his office. It read DO MORE. The former President and CEO of the Georgia Wildlife Federation is a living example of how much you could get done if you just DID MORE.

But what if you did all that, and also worked to improve the world we live in? Why not?

Roughly eight years ago my business partner Mike Killeen wrote, recorded, and released an album titled “Poverty is Real,” featuring a song by the same name. His belief, which I agreed with, was that poverty was a singular driver of many human conditions and problems, whether you were discussing healthcare, crime, education, homelessness, or even the environment. We both also agreed that as a popular issue, poverty is about as unsexy as it comes.

After releasing his album, he decided to try to DO MORE about the issue and try his hand at activism. A non-profit was established, eventually branded as Amplify My Community. The basic concept was to use live music events to bring public interest and fundraising to the issue of poverty, i.e., try to make the issue sexier through music! You come to a great show and your money goes to fighting poverty.

I was appointed as chairman of the Advisory Board, and as a donation, myself and my business partner John Lenz decided to put the full weight of Lenz’s marketing resources, skills, and networks into the effort, because we thought this was a way Lenz could DO MORE for the community.

The organization, run by volunteers, produces great shows and fundraises through the business of ticket sales, sponsorships, merchandising, and food and beverage vending, all of which passes through to a handpicked charity in a particular community.

Over the years, we’ve “Amplified” Decatur, Nashville, Asheville, Charlottesville, Athens, Atlanta, and Suwannee, raising hundreds of thousands of dollars, which has gone directly to effective, hands-on charities in those communities that work to alleviate the effects of poverty and homelessness.

On Saturday April 14, the Amplify Decatur Music Festival returns to the downtown square with arguably the best lineup we’ve ever had at any event, top to bottom, with The Lone Bellow, The Jayhawks, Amanda Shires, Parker Millsap, and Dwayne Shivers. Those who came last year to see Lucinda Williams will remember a magical night on the square.

Not content with just an outdoor festival, we are doing more with additional musical events over the same weekend at Eddie’s Attic, which has supported our efforts for the last seven years going back to the days of Eddie Owen, who helped us put on our very first Amplify show. New ownership has been generous as well, and the weekend’s shows are worth considering. Friday night’s show features the very talented Jared and Amber, Saturday night’s “Sirens of South Austin” show has Rebecca Loebe, Grace Pettis, and Betty Soo bringing their great songs and three-part harmonies. Sunday night, we have the Amplify Decatur capper with a Townes Van Zandt VS. Steve Earle tribute night, which will be a barn-burner.

We hope you can join us this year for what will be an awesome evening of beautiful music, delicious food from Decatur’s best restaurants, and outstanding craft beer. If so, you will be DOING MORE than entertaining yourself, but also helping our community. 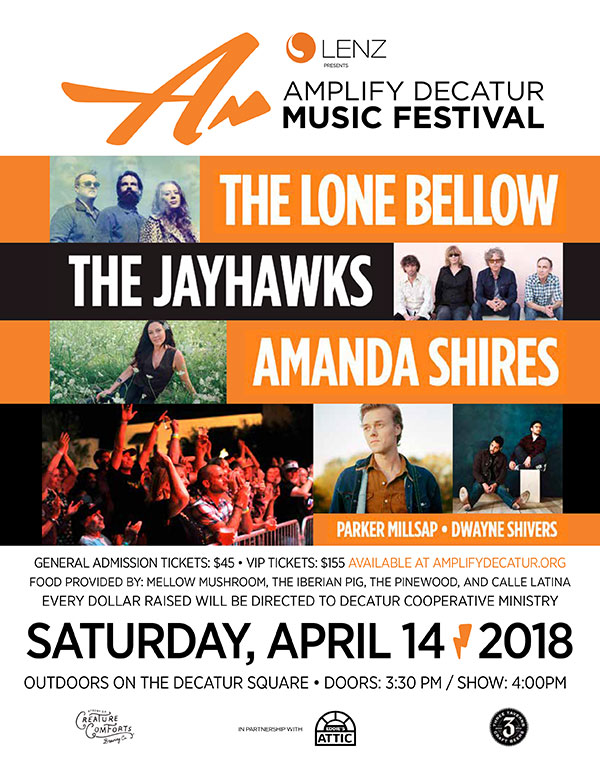